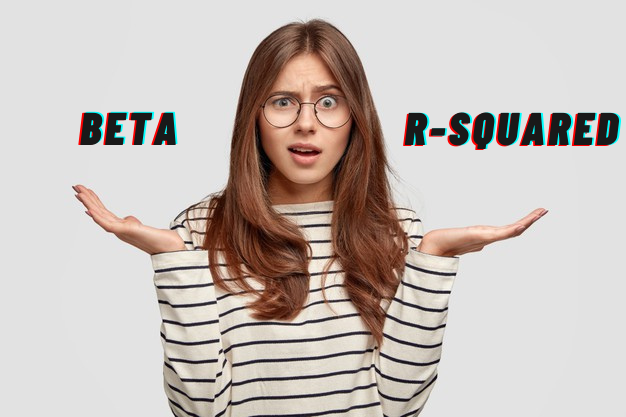 Prior to investing in units of a mutual fund, it is essential to understand a few statistical tools that evaluate the risk and volatility associated with schemes. Having knowledge regarding these tools enables investors to keep track of their investments and ensure they have a well-diversified portfolio. Some of the statistical tools that are used to understand the volatility and relationship between a portfolio and its index are Beta, Standard deviation, and R-Squared. Let us focus on two tools amongst these – Beta and R-Squared.

What is Beta and how to read it?

Beta and R-Squared are two statistical tools, though related, are quite different. A beta is a tool that measures the volatility of the fund in contrast to the index. It depicts the sensitivity of a fund to the movement of the market. For instance, if the Sensex moves up by 15%, the Beta of a fund will show you if the returns of the fund will be more than 15% or lesser than 15%.

In an Index, the value of Beta is taken as 1. Equity funds could have a beta value greater than or lesser than 1. The expected movement in a fund can be derived by multiplying the fund’s beta value with an index’s expected percentage movement. Let us understand this by way of an example. Let us assume that a fund has a beta of about 1.5. The expected movement in the market is a hike of 10%. So, the fund could move up by about 15%, i.e., 1.5 x 10. What happens if the market falls by 10%? Then the fund could lose about 15%.  This indicates that a fund having a beta greater than 1 will definitely see a higher rise than that of the market and vice versa.

So, for an investor, for whom the focus is safety, the safe bet would be investing in a fund with a beta lesser than 1, as such funds might not have a higher return when the markets see a high, but they offer better protection when the market sees a fall.

However, the problem that arises with using Beta is that its calculation depends on the Index, and it is possible that the index might not be correlated to the fund movement. For instance, if Beta is calculated for a large-cap fund as against a madcap index, the whole calculation would be meaningless. This makes it important to take a look at the next statistical tool along with Beta, i.e., the R-Squared.

What is R-Squared and how to read it?

For instance, the benchmark for fixed-income securities is T-Bill and for equities, the benchmark is the Sensex or NSE Nifty. The R-Squared shows the reliability of the Beta and it varies between zero and one. There are also commonly shown as percentages in the range of 0% to 100%.

An R-Squared of one is an indicator of a perfect correlation of the fund’s performance with its benchmark index. A high R-Squared, i.e. between 0.85 and 1, is an indicator that the performance of the fund is in sync with that of its benchmark index. On the contrary, a fund having a low R-Squared, i.e., 0.7 and less, is not in tandem with the index. So, an index fund that invests in the Sensex must have an R-Squared value of 1 when it is compared to the Sensex. For equity-diversified funds having an R-squared value that is higher than 0.8 means that the underlying beta is quite reliable.

The Relation Between Beta and R-Squared

Now, that the terms, Beta and R-Squared are quite clear to us, why should an investor read them together rather than individually? R-squared measures every single price change of an asset and how closely it correlates with a benchmark. On the other hand, Beta assesses how huge are those price changes in connection to a benchmark. When R-squared and beta are used in unison, these tools provide investors an elaborate view of the asset manager’s performance. For example, let us assume that the beta of a fund is very high, however, the R-Squared is quite low; in such a scenario, it might not be appropriate to simply consider only the beta and compare the volatility of the fund with the benchmark as the fund has little correlation with its benchmark. Therefore, when these two tools are used together, it helps investors understand the fund and its correlation with the index in a much better manner, create a good investment portfolio, and make some good investment decisions.

5 Excuses to Ditch and Start Investing

Ved - July 8, 2021
As investors, we not just look at short-term gains to meet our immediate goals, but also look at building a corpus to...